Every ten years, the federal government performs its largest and most complex peacetime operation – the United States Census. There are a lot of things riding on a complete Census count for a community, including infrastructure, education, first responders, housing and more. The risk of undercounting can change the trajectory of a city or neighborhood for more than a decade.

“I’m a lifelong Census nerd. I loved filling out the paper survey when I was a kid,” says Casey Burke, Program Director overseeing Breaking Ground’s Street to Home outreach teams in Brooklyn. As a social worker, Casey is used to solving problems with ingenuity and limited resources.

Since early 2019, Casey has been working closely with Brooklyn’s Community Board 14 (CB14) on the Census. Brooklyn had the lowest response rate of NYC’s five boroughs for the 2010 Census, and the area represented by CB14 had among the lowest response rates of any neighborhood in New York City. CB14 resolved to change that for 2020. They formed a “complete count committee” that included representatives from social services agencies, immigrant communities, religious groups, and organizations working primarily with people of color. In collaboration with the larger Brooklyn-wide complete count committee, they rolled out an education campaign with the goal of reaching – and counting – marginalized and historically disenfranchised populations

While she learned a lot about the Census and strategies for increasing self-response rates, Casey had trouble finding information about how people experiencing homelessness could and would be counted. While official Census enumerators would organize an effort to count homeless individuals sleeping unsheltered on a specific date (between March 30 and April 1), there was acknowledgement that this would likely still miss many people experiencing homelessness.

And then COVID-19 disrupted everything. Though the Census has always faced challenges when it comes to underserved populations, especially those experiencing homelessness, the coronavirus and resulting shut down orders made traditional count efforts nearly impossible. Casey was determined to figure out how she could ensure that Breaking Ground’s clients experiencing homelessness would be counted.

The main method of collecting Census data is the self-response operation, which entails mailings to approximately 95% of all housing units in the country. For the first time in 2020, initial Census mailings have a unique ID and invite each household to complete an internet-based response (surveys in 2000 and 2010 were paper only). There are also options to utilize a toll-free number to ask questions or give survey responses over the phone in 13 different languages.

A further multi-phase effort includes a manual count of people experiencing homelessness on the streets and in shelter, door-to-door canvassing to collect survey responses from those who do not self-respond, and counts of other locations at which people might stay who do not have an official residence (camp grounds, RV parks, etc.). Despite all of these plans, the impacts of COVID-19 have complicated both self-response and enumeration efforts.

After months of asking questions and receiving very few answers, Casey decided to take a closer look at the online survey shortly after its release in April. She soon discovered that you did not need the special ID code provided by the Census bureau in order to fill out the online form. And then she found a little-noticed check box on the form that allows people to indicate that they “do not have a street address.” Checking that box revealed a part of the survey that was previously more difficult to navigate when surveys were completed on paper:

With this new information, Casey quickly reached out to colleagues who work at our drop-in center in Ozone Park, Queens, where people experiencing street homelessness can come inside to access meals, medical and psychiatric care, and more. Staff at the drop-in-center were able to encourage clients to do a test run on computers, tablets and smartphones on site – and it worked, clients were able to complete the Census survey and be counted. 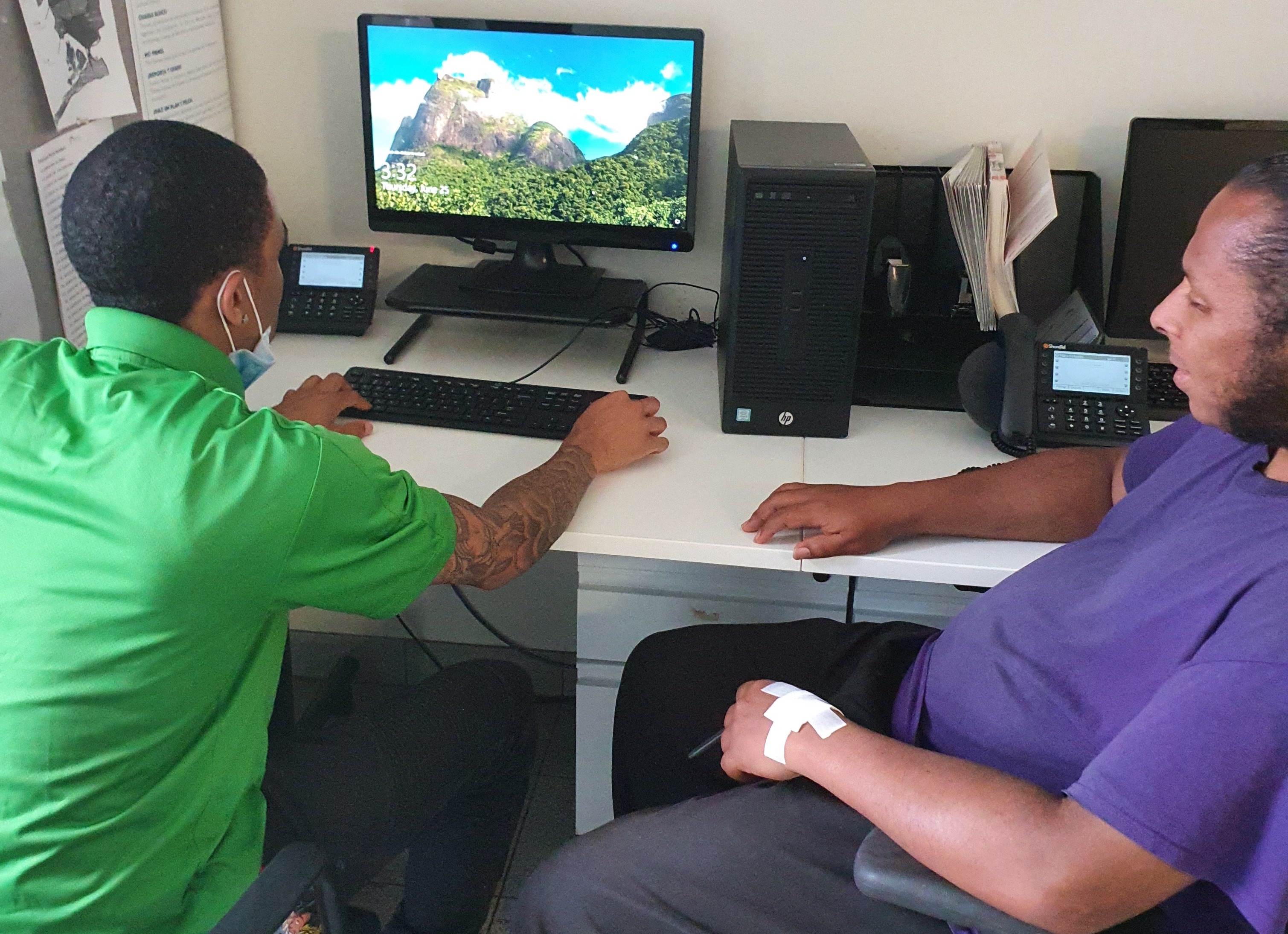 Staff at our Queens Drop-In Center help clients log on to complete the 2020 Census survey online.

After finding success, Casey put together a brief how-to memo for our entire outreach team. Now, these colleagues can talk to clients about the importance of the Census for future housing and service provision needs and, if they want to proceed, help them fill out the survey on a smartphone immediately.

“It may seem like a small thing,” Casey says, “but everyone being counted can make a world of difference.”

A complete count, including people experiencing homelessness, could indeed make a huge difference - among other effects, an undercount in 2020 could result in Brooklyn losing two Congressional representatives. And though the Census has always made good faith efforts to count everyone, adding the opportunity to answer the survey with a street location could help impact the level of services available to people experiencing unsheltered homelessness.

Have you filled out your 2020 Census response survey? Do it today – it’s simple, easy, and incredibly important. Visit https://my2020census.gov to fill out the online survey, or visit the Respond by Phone page to learn more about toll free numbers in over 13 languages.

Save the Date for Serving Up Home: Summer Edition

Join the Junior Board on Thursday, September 24th and help raise crucial funds to provide a safe place to sleep for homeless New Yorkers