For someone with a disability, that can be a powerful phrase. Emilio was born in Brooklyn and grew up in the Gowanus Houses. Although he experienced vision impairments since birth, he did not learn he was legally blind until he was eight years old. He can see the outlines of objects, colors and shapes, but is not able to gauge distance. Objects are closer than they appear to him, and distance appears to be further, longer than it is. Though his family didn’t have the resources to access the supports and extra help he needed to pursue higher education in his youth, he feels fortunate to have had many advantages, including summer day camps funded through Helen Keller Services for the Blind and a trip to Washington, D.C. to visit the White House when he was 12.

Growing up, Emilio loved listening to the radio and watching television and cartoons and dreamed of a career in media. He was always told, “You can’t because of your sight.” He listened, heard the message loud and clear, and steered away. Upon graduating high school, he went to work as a vendor, stocking vending machines, cafes and snack bars across the city. He continued to live with family for more than a decade, as he could never quite afford an apartment on his own. When Breaking Ground’s first new construction residence, The Schermerhorn, was marketed through the affordable housing lottery, Emilio applied and was among the first residents to move in when the building opened in 2009. This was the first time living on his own and signing a lease, and Emilio remembers it as an important moment of gaining independence, at thirty years old. He was not initially involved with social services at The Schermerhorn, as he was employed and stable. But when he lost his job in 2011, he connected with our onsite service partner, The Actors Fund, and worked closely with case management to ensure he could remain stable in housing and plan for the future. 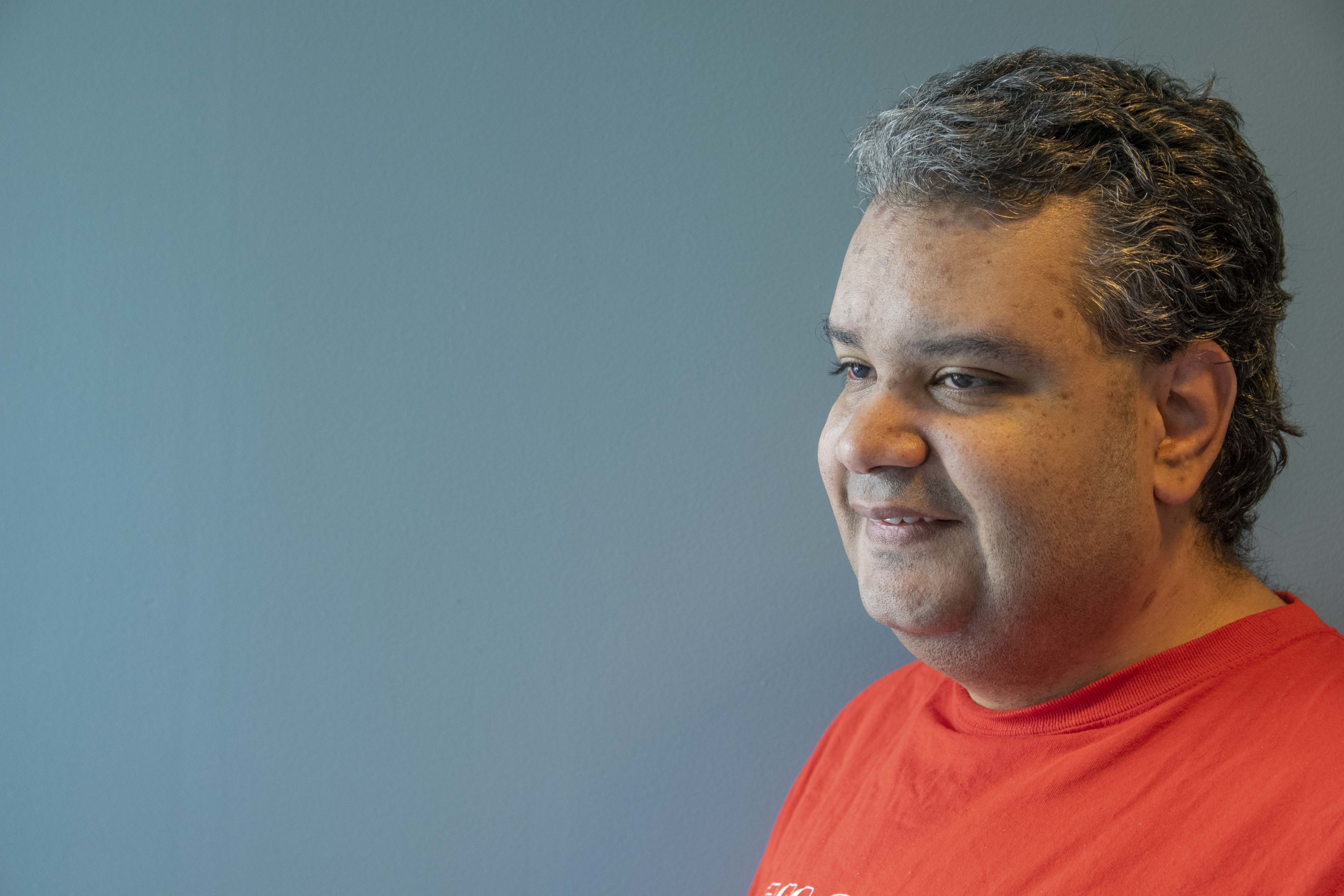 In 2013, Emilio began to explore higher education with assistance from staff at The Schermerhorn. Utilizing a combination of financial aid and sponsorship from the New York State Commission for the Blind, he enrolled part-time at Kingsborough Community College. In the years ahead, he would host his first sports talk radio show on WKRB, Kingsborough’s educational radio station, broadcasting on 90.3 FM in Brooklyn and streaming live at www.wkrb.org. The members of the gardening club at The Schermerhorn gathered around the radio to listen to his debut broadcast.

Upon finishing his Associate of Science in Media Arts degree, he transferred to Brooklyn College, where he continues his studies toward a double-major in Television and Radio, and Puerto Rican and Latino Studies. Emilio is active in Brooklyn College Radio and BRIC public access programs, where he has taken classes in podcasting. He currently hosts a radio show at www.mybcr.org on Wednesdays from 11am to 12pm titled “Sports & Life in 60 with Emilio.” He is grateful for the community at The Schermerhorn, which has helped him discover that indeed, he can. Keeping his focus on finishing school, he is seeking internships with sports broadcasters such as ESPN. And when he graduates from Brooklyn College (anticipated in the Fall of 2020), Emilio will be the first in his family to complete a college degree.

Today as an active member of The Schermerhorn community, Emilio participates in the gardening club, podcasting club, and productions in the black box theater. He says the social services, gatherings, holiday parties, and tenant activities have helped him to become more comfortable in public settings. After feeling like he was a “loner” in his youth, Emilio appreciates the community feeling that is unique to The Schermerhorn.

A New Beacon of Hope in Brooklyn

Gala 2022 Raises Over $2.9 Million to Support Outreach and Housing Programs

A New Day for Sustainable Supportive Housing in the South Bronx

Save the Date for the 2022 Celebrating Home & Community Gala

Serving Up Home: The Summer Edition takes the stage at the Prince George Ballroom to raise critical funds in support of street outreach for homeless New Yorkers

Save the Date for Serving Up Home: The Summer Edition

See Joseph tell his story in his own words, and how our outreach and transitional housing teams helped him come indoors to housing

After Years of Struggle, a Place to Rest

Maria struggled with homelessness and housing instability brought on by a health crisis. Today, she's safe and stable at Webster Residence in the Bronx.

We gathered for a ribbon cutting and open house at Edwin's Place in Brownsville, with 125 new supportive and affordable apartments

A word of encouragement can make all the difference.

Applications Available for Studio Units at Park House in the Bronx

Statement on the Verdict in the Murder of George Floyd

Despite a pandemic that hit NYC hard, Breaking Ground sustained and grew our services for the most vulnerable New Yorkers in 2020

Our CEO, Brenda Rosen, made the Nonprofit Power 100 list for the third year running.

In an op-ed for Gotham Gazette, our CEO Brenda Rosen presents the case for hotel conversions to supportive and affordable housing, and why we should do it now.

Even During a Pandemic, Celebrating a Milestone Year

Charlie Alvarez, a tenant at our Prince George residence, talks about overcoming homelessness and celebrating 10 years of sobriety.

In extraordinary times, our exceptional honoree - David Brickman, CEO of Freddie Mac - reminded us just how important affordable housing is to our recovery.

Four expert barbers worked their magic on more than two dozen residents of our East Flatbush Safe Haven to help people look and feel their best.

Though we cannot gather in person this year, we celebrate our generous sponsors and the great work of our Junior Board.

Everybody Counts in the 2020 Census