Formerly homeless, Renee is now home at The Schermerhorn.

Renee first became homeless in 1993. At that time she had been living in a brand new, subsidized building on Putnam Avenue in Brooklyn with her two young children. Within six months the building began rapidly deteriorating. Burglars stole from residents and from the facility itself, taking everything down to the pipes, and leaving residents without heat or hot water. Lack of housing options and a persistent substance abuse problem finally led Renee to start sleeping on the streets.

She knew she couldn’t take proper care of her children this way, so she took them to Bureau of Child Welfare. BCW placed them with a kind woman who welcomed Renee to visit every week. For the next three years, from 1993 to 1996, Renee slept on the streets and in parks, frequenting Union Square Park, Tompkins Square Park, and church steps at 16th Street and 6th Avenue in Manhattan. She received regular meals from soup kitchens and from City Hall’s Midnight Run. During this period Renee was arrested multiple times for stealing food and trespassing in apartment buildings where she would sleep in the hallways during bad weather.

Eventually Renee was placed in “Serendipity,” a program for women with substance abuse problems located in Bedford Stuyvesant, Brooklyn. Though warned that if she left the program early she would be violating her probation and subject to extended prison time, Renee left anyway in 1999. She was arrested soon afterwards and spent the next six years, from 1999 to 2005, in and out of prison, staying mostly on the streets when she was out, then getting sent back for violating the guidelines of her probation. During her time in prison, however, Renee became sober, and even became a facilitator in a “Staying Out” sobriety program for inmates.

When she got out of prison in 2005 Renee moved in with a friend in Coney Island. The friend was charging her more rent than she could afford on the income of SSI she had just begun to receive. She met Jimmy, the man who ran a soup kitchen on 21st Street in Coney Island, that same year. Jimmy helped Renee get moved into the YMCA on Jamaica Avenue. Renee lived there for 18 months. Then she moved into a fast-track, scatter-site apartment. She fell in love with the one-bedroom on E 98th Street and Kings Highway, and spent a lot of her time and money making it feel like home. After nine months, however, the scatter-site program changed, and she had the Jamaica Safe Haven. Renee says she struggled to stay positive during this time, because she was angry and upset to leave her new apartment and the belongings she had bought to make it home. She settled back into life back at the Y though and took part in many activities and groups there, including anger management, relapse prevention, and game night. In 2008 the supervisor of Breaking Ground’s Brooklyn outreach department called her and told her about the Schermerhorn. In spring of 2009 she signed her lease. 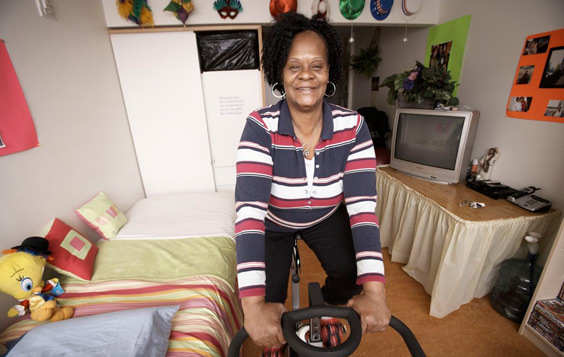 Currently, Renee volunteer teaches spiritual growth classes at her Church on Linwood Street in Brooklyn and at Volunteers of America on 104th Street in Manhattan. She continues to be a vibrant member of the Schermerhorn community, utilizing both social work and therapy services available to her in the building. She participates in many building activities, and particularly loves those geared toward singing, performing, and healthy cooking. She frequently visits her daughter, who lives in the Bronx with her family, and speaks often to her son in Charleston, South Carolina, who also has a family of his own. Renee is very proud to have four grandkids and looks forward to watching them grow up.